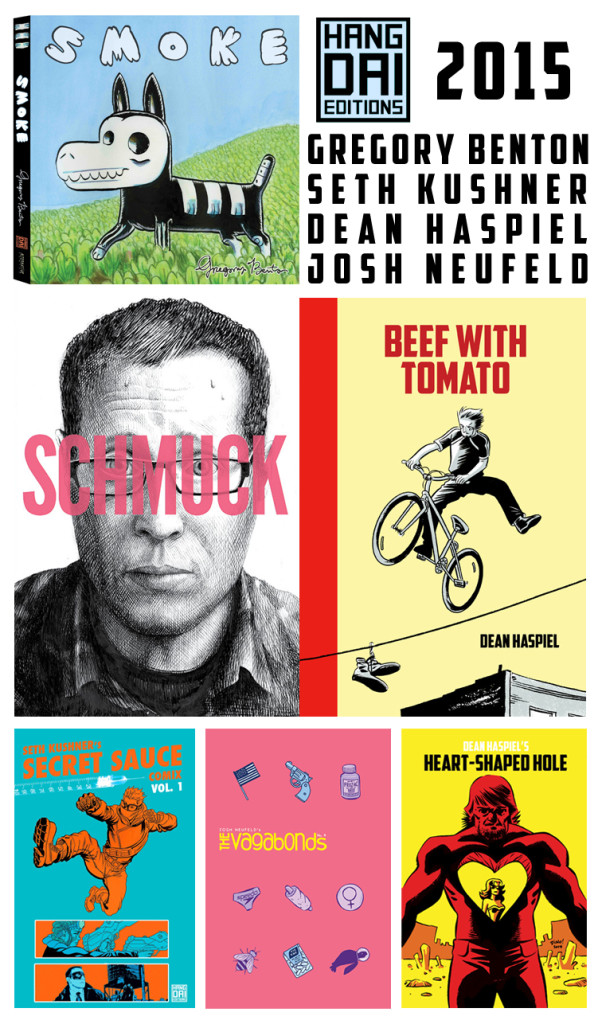 Hang Dai Editions was formed by New York cartoonists Gregory Benton, Dean Haspiel, Seth Kushner, and Josh Neufeld in 2014 to publish their signature works, some of which they make a point of hand-selling only at shows via personal interaction.

HDE is pleased to announce our 2015 slate of releases. We are also teaming up with Alternative Comics for distribution and some publishing. Alternative Comics publisher, Marc Arsenault affirmed, “I’m very excited to welcome Hang Dai Editions to the new Alternative Comics. Josh and Dean were a big part of Alternative in the past—not just as creators. It’s nice to have that continuity. I’m looking forward to everything that comes out of their studio.”

SMOKE by Gregory Benton
September 2015
64-pages. Full color.
After an accident on an industrial farm unhinges two young brothers from reality, they are guided through a weird and wonderful journey by Xolo, the mythological protector of souls.

BEEF WITH TOMATO by Dean Haspiel
September 2015
96-pages. B+W comix and essays. (published by Alternative Comics)
A native New York bruiser is fed up with life in the dregs of a drug-addled Alphabet City where his neighbors are shut-ins and his bicycle is always getting stolen. He escapes from Manhattan to make a fresh start in Carroll Gardens, Brooklyn, only to face a new strain of street logic — where most everything he encounters is not as it seems. Emmy Award-winning artist Dean Haspiel returns to his semi-autobiographical roots with BEEF WITH TOMATO, where he explores the emotional truths between prime and primate.

THE VAGABONDS #4 by Josh Neufeld
March 2015
24-pages. Full color.
Josh Neufeld’s The Vagabonds #4 serves up a spicy blend of journalism, social commentary, memoir, and literary fiction. This issue features Neufeld’s story of racial profiling at the U.S./Canadian border and three collaborations with Neufeld’s wife, writer Sari Wilson. Throw in a couple of light-hearted travel tips, and The Vagabonds #4 is chock-full of the thought-provoking and witty comics Neufeld is known for.

FORCE OF NATURE by Gregory Benton, follows an artist through a lush forest as he searches for a lost sketchbook.

THE VAGABONDS #3
After an eight-year hiatus, Josh Neufeld’s The Vagabonds returns with its third issue — now published by Hang Dai! Many things have changed in the interim: Neufeld produced three books, became a father, and won a year-long journalism fellowship. This issue highlights Neufeld’s journalistic work over the past few years, including reportage on Hurricane Sandy, the Arab Spring, the education wars (with writer Adam Bessie), and the life of a “comics journalist.”

STAKE
A lone woman fights the odds in this no-holds-barred short companion piece to B+F by Gregory Benton.

POCKET BOOK 2 by Gregory Benton
Drawn from life, pages from Gregory Benton’s sketchbooks create a loose narrative. Travel through the NYC subway, take in a concert or two, and wash up on the beach.

Alternative Comics is an independent publisher of creator-owned graphic novels and comic books founded in 1993 and based in Cupertino, California. Alternative Comics established itself as one of the leading publishers of the independent comics movement in the 2000’s. Under the management of comic book industry veteran Marc Arsenault since 2012, Alternative has expanded it’s range of titles and formats, continuing to work with new and emerging talent as well as many seasoned creators. Alternative Comics’ creators and books have been nominated for and won multiple comics and publishing industry awards. Their books are distributed by Consortium Book Sales & Distribution and comics are distributed by Diamond Comic Distributors, Inc. More information at: http://IndyWorld.com