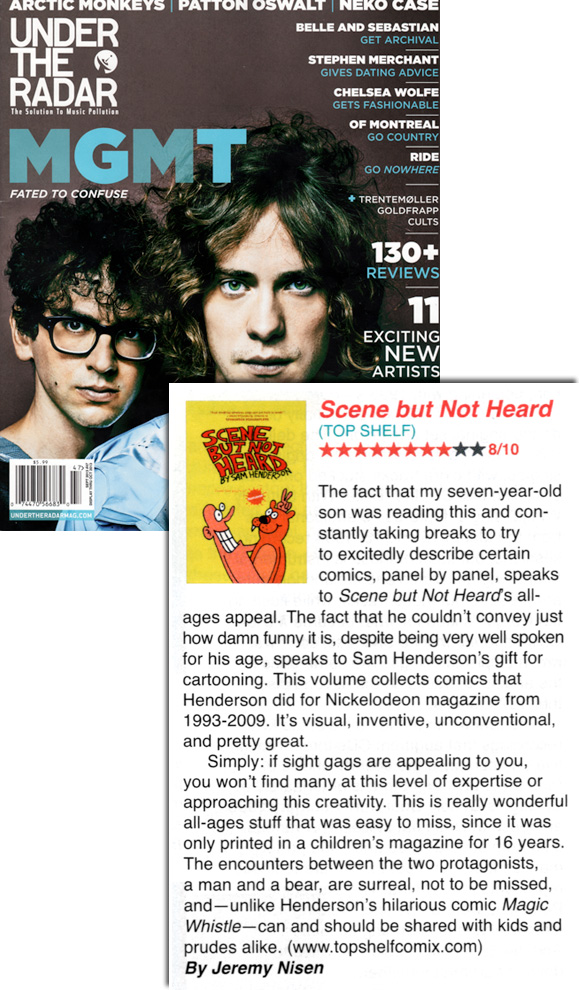 Sam Henderson’s Scene But Not Heard gets a glowing review in the September 2013 issue of Under the Radar – the one with MGMT on the cover.

“The fact that my seven-year old son was reading this and constantly taking breaks to try to excitedly describe certain comics, panel by panel, speaks to SBNH’s all-ages appeal. The fact that he couldn’t convey how damn funny it is, despite being very well spoken for his age, speaks to Sam’s gift for cartooning. This volume collects comics that Henderson did for Nickelodeon magazine from 1993-2009. It’s visual, inventive, unconventional, and pretty great.

“Simply: if sight gags are appealing to you, you won’t find many at this level of expertise or approaching this creativity. This is really wonderful all-ages stuff that was easy to miss, since it was only printed in a children’s magazine for 16 years. The encounters between the two protagonists, a man and a bear, are surreal, not to be missed, and — unlike Henderson’s hilarious comic Magic Whistle — can and should be shared with kids and prudes alike.”

—Jeremy Nisen, Under the Radar