Debuting on ComiXology, and also available direct from the publisher, on June 19, is the free digital-only full-length comic Magic Whistle #0 by Sam Henderson. This newly assembled compilation collects strips that originally appeared online and in (mostly) out of print books, including Measles, Hotwire Comics and Expo 2001; plus self-published mini-comics and long out-of-print back issues of Magic Whistle. “Magic Whistle 0 will serve as the perfect introduction for readers new to the madcap, ever-expanding world of Sam’s vast oeuvre, possibly leaving them scarred for life”, boasts Alternative Comics’ General Manger Marc Arsenault. 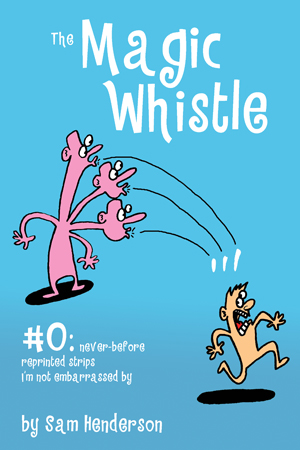 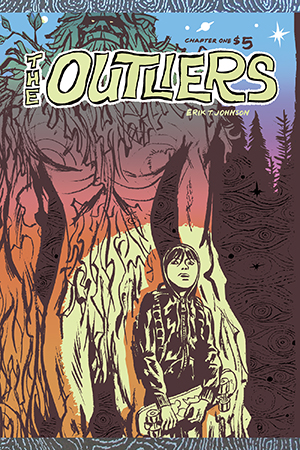 New to the Alternative Comics family is veteran designer and illustrator (New Yorker, New York Times Book Review, GQ, etc.) Erik T. Johnson’s debut solo comic The Outliers Chapter One. Originally printed with help from a Kickstarter campaign, the comic will receive direct market distribution through Alternative Comics in August. The Outliers is an action-adventure story that follows a speech-impaired 11 year-old boy living in the Pacific North woods who has a very unusual friendship with an 18-foot tall, hairy woodland giant. The comic was produced with a high and unique degree of craft; employing French Paper Company papers, letterpress covers and a color dustjacket; and, it was selected for the Society of Illustrator’s 55th Annual Sequential Art show in New York. The Outliers will make its debut at The College of Comic Book Knowledge in Minneapolis, Minnesota on June first and be showcased at CAKE – The Chicago Alternative Comics Expo on June 15-16., with the author in attendance at both events. The Outliers will be available in stores and on ComiXology on August 28, 2013.