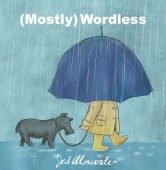 Jed Alexander’s (Mostly) Wordless, Kevin Scalzo’s Sugar Booger #2 and the anthology The Big Feminist BUT are now available on ComiXology, Comics Plus, Apple’s iBooks and Amazon’s Kindle. The physical books are already for sale or available for pre-order on several online shops and will be showing up in brick and mortar shops over the next couple of weeks. Two of our most popular titles — James Kochalka’s Peanutbutter & Jeremy’s Best Book Ever and Elaine M. Will’s Look Straight Ahead — are available for the first time on Amazon’s Kindle. See full details for each title — conveniently linked to above.