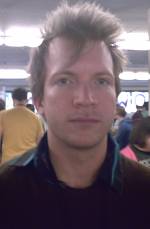 Alixopulos is a cartoonist and illustrator living in California.  In his comics, he takes particular interest in how icon and narrative interact and swap roles.  His stories usually explore broad social themes while using comicsy visual grammar to evoke the interior and the individual.  He likes how comics stake out a common zone of understanding and also expose where understanding breaks down.  He is most comfortable in the profane realm of the cartoon, where the word won’t go; where language becomes sign, visual joke, sigil and heraldry.

Alixopulos’ graphic novel The Hot Breath of War is a set of stories grouped within a spectrum of passion and aggression.  It engages wars from multiple perspectives, from participant to victim, and explores the euphemisms and symbols we use as incantations for conflict.  The Hot Breath of War was nominated for Outstanding Graphic Novel in the 2008 Ignatz Awards and featured on tcj.com’s “Top 100 Comics of the Decade.”

The Hot Breath of War
Mine Tonight