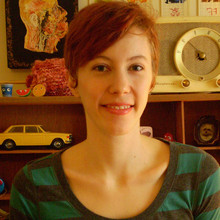 Tessa Brunton is a cartoonist living in Berkeley, California.  Her comics have appeared in Bitch Magazine, Maisonneuve Magazine, and The Comics Journal, as well as the anthologies I Saw You, The Bridge Project, Pratfall, Hell and Demonic Possession Part One, The Girls Guide to Guy’s Stuff, and Runner Runner.

Her first comic book, Passage, was published by Sparkplug Comic Books in 2011 and was nominated for two Ignatz Awards, Outstanding Comic and Promising New Talent.  Her mini-comic Second Banana is a Best American Comics 2014 notable comic.

Brunton has also been the Charles M. Schulz Museum Cartoonist in Residence and the featured artist in the Cartoon Art Museum’s Small Press Spotlight.