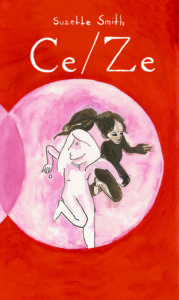 Honey Czarny and Amelia Smith are 7th graders who share fragmented memories of past lives in which they were powerful beings named Ce and Ze. A rival king’s plot to murder Ze forced her to flee her kingdom. Ce and Ze study and emulate human behavior but wish to return to their realm.

Ce/Ze is the fourth book in the Sparkplug Minis Series, a series of short-run (500 copies) mini comics by new and/or underappreciated artists.