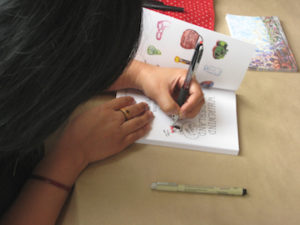 Rina Ayuyang is an Eisner and Ignatz-nominated cartoonist based in Oakland, California. Stories from her self-published mini-comic series “Namby Pamby” were collected in the book Whirlwind Wonderland co-published by Sparkplug Comic Books and Tugboat Press. Her online comic, Beginning’s End was nominated for an Eisner Award for Best Short Story. Her A Cartoonist’s Diary contribution on TCJ.com was chosen as a Silver medalist by the Society of Illustrators’ in the 2016 Comic and Cartoon Art Annual.

Rina has self-published comics such as Pet Project and Doodle DAZE, and contributed to various anthologies like Unicorn Mountain #3, Stripburger, and Runner Runner. She has exhibited at the Arlington Art Center, the Cartoon Art Museum, and been a cartoonist-in-residence at the Charles Schulz Museum. She also runs the comics imprint Yam Books, and plays the “nice” co-host on the comics podcast, The Comix Claptrap.