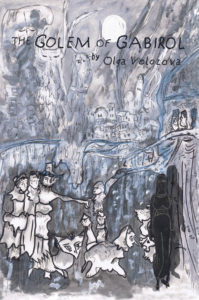 A gorgeous tale from Olga Volozova, based on the legends of poet and scholar Solomon Ibn Gabirol. Crowded pages filled with breathlessly light linework and a touching, dreamlike narrative.

Olga Volozova’s portrait of the life of the late Solomon Ibn Gabirol mixes ancient Jewish lore with her unique, fluid style of storytelling in The Golem of Gabirol. Originally told by Ibn Yahya in “Shalshelet ha-Kabbalah,” legend has it that a rival of Gabirol’s, a jealous Muslim poet, murdered him and buried his body beneath a fig tree. When the tree bore an abundance of extraordinarily sweet figs, a search for the missing Gabirol was instigated, and his remains were found in the roots of the tree. The murder paid for his crime with his life.

It is also said that Gabirol created a rare female golem, a creature made of inanimate matter and brought to life by magic, to serve as his companion; when the authorities found out, they were outraged (some say because of the potentially romantic relationship between Gabirol and his golem), and so to save himself from brutal punishment, Gabirol withdrew his magic and turned his golem back into a pile of wood.

Volozova has woven these two fascinating, poignant stories together into an achingly beautiful story of unrequited love, jealousy, magic, and justice. Her watercolors, complex detail work, and her fairy tale-style pacing all work to create a thoughtful and vivid retelling of an incredible fable that remains powerful to this day.

“This comic was one of the first published by Sparkplug after the death of Dylan Williams, and the discovery of a talent like Olga Volozova’s is a testament to Williams’ eye for comics that are unusual, intensely personal and poetic.” — Rob Clough, High Low