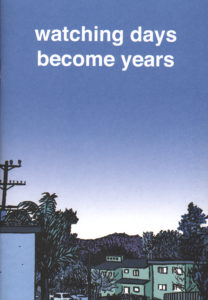 Jeff LeVine’s Watching Days Become Years #1 presents 40 pages of unique and personal comics, real life stories set in Chapel Hill, San Francisco, Portland, and Los Angeles. This is a collection of the author’s thoughts on working and city living. The tone ranges from darkly comic and down to earth, to startling clear observations on the world at large, all skillfully drawn with the eye of a poet.

Jeff LeVine’s comics have previously been published in the cult 90’s series, No Hope and Lust for Life, as well as in numerous anthologies, and he edited eleven issues of the magazine Destroy All Comics. 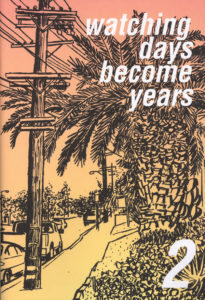 This issue of Watching Days Become Years is a cycle of short stories. Each has its own theme, but they mostly revolve around life in the quiet side streets of Los Angeles, California. The exception is a travel diary of a less than twenty-four hour long escape to San Francisco – to walk over new hills and be mesmerized by the difference and to hear an amazing concert by Ornette Coleman. The art is more refined than any of LeVine’s work to date and illustrates his amazing to capture the moment. 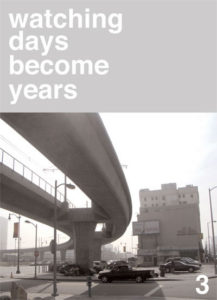 “When I sit down at my drawing table, scratch that because I don’t really have a drawing table anymore…actually most of these comics were drawn on the fly, on the road, wherever I happened to be – sitting in a cafe, on a street corner, on the sidewalk, in a park – wherever. The goal is to capture that elusive something, possibly a little bit of the truth, through the wonderfulness of words combined with pictures i.e. comic books. At the same time the goal is to try to create something new, to find a new angle, a new approach – to challenge myself and hopefully the future reader.

“In the third issue of Watching Days Become Years the comics were drawn in California, between San Francisco and Los Angeles. The focus (as always?) is on the passage of time, on family, friends, books, music, movies, beaches, airplanes, boats, love and hate. The artwork is loose, immediate and lively, drawn in the nice, gray pen-and-ink wash I’ve been working in for the last few years. Hopefully it’s also a comic book that will provide some laughs.” Jeff Levine 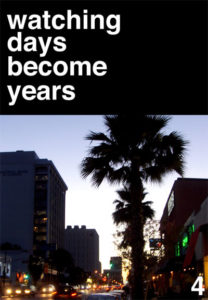 The brand new 4th issue of Jeff LeVine’sWatching Day Become Years, is packed full with more of the unique brand of comics we’ve come to expect from his hand. Half humor, half arty-bullshit. Travel to San Diego, Seattle, Portland, and back home to Los Angeles. Look at trees. Read books. Go to work, come home, and on and on.

“Is it actually autobiographical? In the end, it doesn’t particularly matter. The work is powerful in all its aspects. And that LeVine is able to accomplish this while experimenting with form is all the more impressive.” The Comics Journal

“Watching Days Become Years seems to be sort of the ethos, as well as the title, of the book, as LeVine shows how the many mundane daily events add up to become our lives in retrospect.” The 4th Rail

“In Watching Days Become Years, Levine has struck his own unique vein in the mine first discovered by Harvey Pekar inAmerican Splendor: namely, the interior life of the average guy with a regular job, the guy at the bar, the guy on the bus, the guy at home watching TV. It’s about trying to uncover beauty amidst the bland and even the ugly; it’s about trying to locate the eternal in the quotidian; and finally, it’s about striving to forge a personal style in and through which to represent the little epiphanies that are always there, and need only be looked for and then seized to bring a brief brightness of joy to illuminate what might otherwise be dark, dull and drab days.” Bill Bowser, Copacetic Comics

“This is an excellent book for anyone who wants to just get away from “mainstream” comics–whatever the hell that means–and take a look at everyday things through someone else’s eyes. It’s worth more than a single read, since there is much going on in the pages of the book that you should be willing to uncover.” NeedCoffee.com

“LeVine’s detail work proves nearly perfect; you find out just enough about his life and tastes to fill in the blanks yourself as to how he might feel about certain things as you encounter them — there are vocational concerns, for example. This changes the way you look at the art. Some of the moments that are phrased in blunt terms that might cause a reader to blink seem greatly appropriate to the LeVine you get to know on the page.” Tom Spurgeon, Comics Reporter