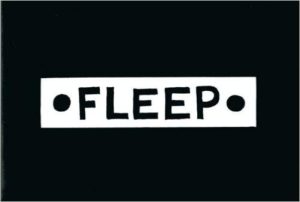 Reclusive math genius Jason Shiga vanished from world attention on the verge of his most amazing breakthrough in June 1967. Twenty years later he resurfaced, having abandoned his scientific background for, of all things, comic books. Shiga has managed to create the most thoughtfully beautiful comics since 1997, including the fish-out-of-water story Double Happiness and the critically praised Meanwhile. His newest book Fleep is a complex and subtle yarn about young man trapped in a phone booth. The Comics Journal says “His drawing, and his wit, makes his projects not just an exercise in the amazing untapped technical aspects of comic but a uniquely satisfying reading experience.” 2004 Eisner Award nominee and Ignatz Award winner.

“Shiga’s most recent book, Fleep, mixes his love of puzzles with the more straightforward kind of story. A man wakes up inside a phone booth encased in concrete. With no memory of how he got there and slowly losing oxygen, he utilizes scientific principles and the contents of his pockets to discover where he is and how he got there. “By my calculations, the rate of torsion on my pendulum indicates my latitude to be roughly 37 degrees – 49 degrees North,” is a typical insight. One setback after another must be overcome with ingenuity. Naturally, as a Jason Shiga book, the man’s story proves to be far from predictable. Fleep has the kind of ingenious plot that would be worthy of Arthur Conan Doyle.” —Andrew Arnold, Time Magazine

“Jason Shiga’s breakthrough graphic novel (originally published in strip form, serialized) is a finely-tooled and tuned one-set, one-character trauma-drama. A man find himself in a phone booth surrounded by concrete; where is he, and how did he get there, and HOW CAN HE GET OUT?? There’s a cold, rationalist pragmatism to how this TWILIGHT ZONE-like scenario plays out, and Jason’s protagonist is hardly one to just sit around waiting for the end—and FLEEP is many things. I thought Larry Cohen’s screenplay for PHONE BOOTH had played out the possibilities for such an intense enclosed-set scenario, but Jason Shiga proves me wrong! Terrific, tight, and coiled like a cobra to strike, FLEEP is unlike anything you’ve ever read in comics form. RECOMMENDED!!!” —Stephen R. Bissette