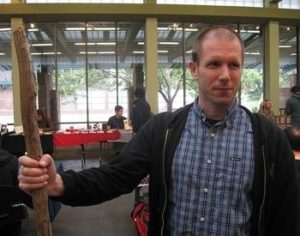 Dylan Williams was a cartoonist, a comics historian, and the founder of Sparkplug Comic Books, a small press publisher and distributor.  Born in Berkeley in 1970, he spend his childhood years in both northern California and India.  In a 2008 interview with Joe Biel, Williams described being a fan of both metal and punk music, and creating his initial comics with skater friends. Williams received little to no formal training as an artist.

In 1998, Williams moved to Portland, where he began Sparkplug a few years later with the initial goal of publishing lesser known work and getting it seen by a wider audience.  In 2007, he reassessed these goals: “Most of the work Sparkplug and I’ve published over the past 5 years has been put to print because I liked it, more than any other reason. So, I can’t really claim to be publishing people who’s work hasn’t been seen by a wider audience. Ultimately it comes down to me liking the work…My chief requirement being that the work I’ve published made me think and challenged me as a reader, requiring an investment of time and thought.” (on Sparkplug’s website)

In the years to come, Sparkplug Comic Books became a successful, well-known small press publisher and distributor in comics.  Williams passed away from complications due to cancer on September 10, 2011.

Biography on The Comics Reporter