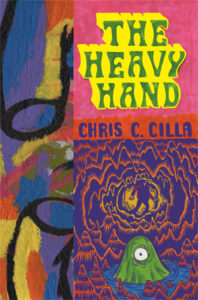 Take an inky road trip with a liar (Alvin Crabshack) into the generally ignored world of mask wearing freaks and monsters both dead and alive. Folk tales are made up by regular schmucks in party houses, caves and vans. Are you concerned about the eggs? Alvin has a story for whoever he meets, including you. Cult cartoonist Chris Cilla (The Diplomat) gets the “graphic novel” treatment, heads have been waiting.

“There’s been a lot of talk in recent years about comics– what they are, what they aren’t: “literary”, “Art”, etc etc. That’s all fine, but sometimes we get books like The Heavy Hand by cartoonists like Chris Cilla, and all of that talk is rendered moot– this book is a ridiculously potent distillation of Cilla’s singular comic book worldview: strange, dark, thick, big-nosed, slightly nightmarish and totally immersive– this is PURE COMICS, the real deal. I’ve long suspected that Chris Cilla is one of the best cartoonists around, and now the proof is here, for all to see. I know I will not read a better comic this year (and maybe not this decade). ‘The Heavy Hand’ is a fucking triumph.” – Zak Sally

“I really enjoyed The Heavy Hand. There is a level of high strangeness throughout the book. Chris Cilla is a serious artist who happens to draw funny, and his work has a comic intensity that is most appealing. It’s an all-around great effort.” – Gerald Jablonski