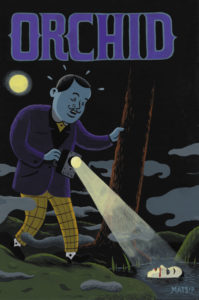 Orchid is a collection of Victorian horror stories produced by Dylan Williams and Ben Catmull. The comic books stories are adaptations of text stories written between 1800 and 1920.

Front cover by Mats!?
Back cover by Ted May

“Orchid is a cool compilation of actual Victorian stories interpreted by ten different artists. Highlights include ‘Tobermory’, written by H.H. Munro and adapted by Gabrielle Bell, and the compelling ‘Green Tea’ by J. Sheriden Le Fanu and adapted by Kevin Huizenga. Even non-goth types will dig this one.” Laurie Henzel, Bust Magazine

“Orchid contains seven black and white adaptations of Victorian-era short stories, all of which involve shocking apparitions. It’s a brilliant conceit by editors Ben Catmull and Dylan Williams. The most amusing of these is “Tobermory,” adapted by Gabrielle Bell from a story by H.H. Munro, about a housecat who, upon being taught to speak, reveals its owner’s most embarrassing secrets. Fantastic animals become a kind of sub-theme, as in David Lasky’s adaptation of E.A. Poe’s “The Raven.” Testing the definition of a comic, instead of containing distinct images, the panels themselves form a picture when viewed as a whole. “Orchid” splendidly mixes modern comix storytelling with a bygone era’s mastery of prose and atmosphere.” Andrew Arnold, Time.com