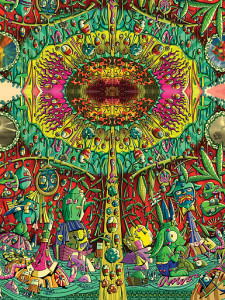 Steven Cerio is an artist who has spent over two decades relentlessly documenting a universe devoid of death and decay. A prominent rock poster and magazine illustrator, his work is best known from his ongoing collaboration with San Francisco-based group The Residents.