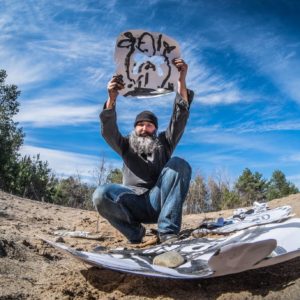 Steven Cerio is an artist who has spent over two decades relentlessly documenting a universe devoid of death and decay. A prominent rock poster and magazine illustrator, his work is best known from his ongoing collaboration with San Francisco-based, performance art and music group, The Residents.

Cerio’s work spans all mediums from magazine and book illustrations to posters, iPod skins, gallery walls, film, animation and posters. His art was featured in the Annie Sprinkle HBO Special and his “Happy Birthday” animation ran every morning on the Nickelodeon cable channel for seven years. He has created screen-printed posters for several musical acts including King Crimson, Negativland, White Zombie, Pete Yorn, Yonder Mountain String Band and Man-or-Astroman. Three of his prints are featured in the set design for Comedy Central’s series “Workaholics”.

His 1999 book Steven Cerio’s ABC Book — A Drug Primer won a Firecracker Alternative Book Award. Cerio’s work has also been featured in various art compilation books including Next: The New Generation in Graphic Design by Jesse Reyes, Non-Traditional Design by Mike Quon, The Art of Rock and SWAG: Rock Poster art of the 90’s by Spencer Drate.

Steven has long been involved artistically with legendary San Francisco group The Residents, creating characters for animation, packaging, graphics and posters. He created vinyl toys based on the group’s costumes aptly named “The Classic Eyeball” and “Mister Skull”, which were produced by Toy Tokyo. His film and animation work with The Residents are included in the permanent collection of The Museum of Modern Art in New York City.

Cerio was raised in Liverpool, New York, where he attended a high school of the same name. He graduated from Syracuse University in 1987 with a BFA. He now lives in Central New York where he continues to make art, film and music.

Pie
Sunbeam on the Astronaut