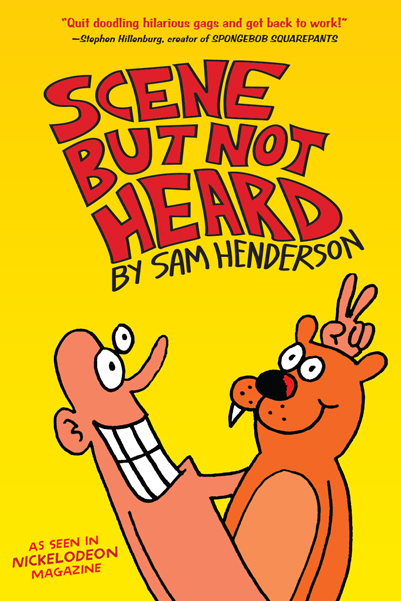 Sam Henderson: Ignatz-nominated creator of Magic Whistle, Emmy-nominated writer and storyboard artist for SpongeBob SquarePants… and also the nutty mind behind “Scene But Not Heard,” the longest-running feature in the history of Nickelodeon Magazine! Now all those strips — the hilarious, wordless adventures of a man and a bear — are collected all in one handsome hardcover. Just try and keep up with Sam’s wild imagination!

“Anyway, buy this book. This is the perfect “all ages” book, with nothing dirty for the kids, and plenty for adults to enjoy.” – Kevin Bramer, Optical Sloth

“Henderson’s work for Nickelodeon shines in its wordless glory, with lots of innovative panel breaking and visual gags that work for comics fans of any age.” — Panel Patter‘s Favorite Graphic Novels of 2013

“Simply: if sight gags are appealing to you, you won’t find many at this level of expertise or approaching this creativity.” — Jeremy Nisen, Under The Radar

“If Spy Vs Spy went out for ice cream with all of Don Martin’s comics and met the Hey Look guys while they were all walking to the big party at Count Screwloose’s house…THIS is the book that would result.” — Chris Duffy