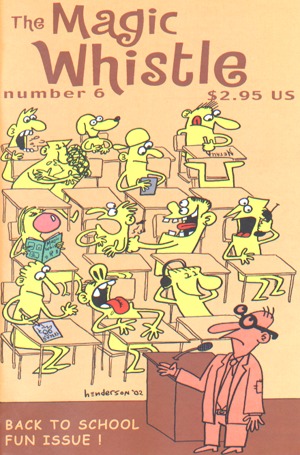 Nominated for the fourth consecutive year for the Harvey Awards Special Award For Humor, Sam Henderson is the funniest man in comics. The “Back to School Fun Issue” of Magic Whistle! Sitting on cats, bad doctors, Sammy Davis Jr, and Dirty Danny are just a few of the subjects covered in the latest issue of the Magic Whistle, which is much like previous issues only different. Multiple Harvey and Ignatz Award nominee Sam Henderson shows proof that he can still draw his comics even when he has a day job. Sam Henderson is a comic genius and is the funniest cartoonist working today, no question about it. If you can read this comic book without laughing, you are not human.