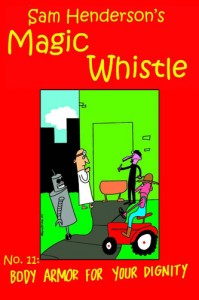 Praised for finding new ways of being funny while simultaneously panned for lacking the draftsmanship skills of his peers, Henderson continues what he’s been doing all along for nearly twenty years! Magic Whistle #11 features the return of Monroe Simmons, a re-coloring of a story previously published in the childrens’ anthology Measles, tons of previously unpublished strips, and the high-low-brow humor audiences have come to expect from this cartoonist who has been nominated multiple times for a Harvey award and once for an Emmy.