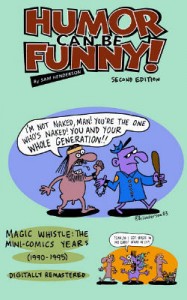 The cult classic is back in print! Sam Henderson’s 1996 collection of his early mini-comics is available once again with this August 2003 release. See what his work liked like back when he was poor(er). Introduction by Mark Martin.

“There are something like 50-60 strips here, with the longest being seven or eight pages. The brevity suits Henderson and his style of savage, biting, sarcastic humor. Henderson realizes the subject matter often doesn’t merit more than one brutal kick-in-the-ass punchline. Some of the best sections feature several one-panel comics on a single page or two-page spread. This isn’t moronic humor; Henderson knows what he’s doing and some of the more satisfying bits of this book are those strips where he pulls apart and analyzes the humor involved or simply acknowledges a strip’s abrupt vapidity. Better critics than myself have been screaming about Henderson for years, including a number of recommendations right here. With this attractive, meaty tome, you no longer have an excuse to ignore them.”
~Tom Spurgeon, The Comics Journal