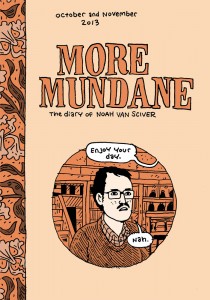 More Mundane began one late September morning with a tiny sketchbook and an impulse. Noah Van Sciver then proceeded to transform the struggles and victories of daily life into a series of quietly poignant revelations interspersed with comedy. More Mundane was printed by the author in an exclusive 100-copy run, and will not be printed again. The digital version was released to all and sundry on Valentine’s day, 2014.