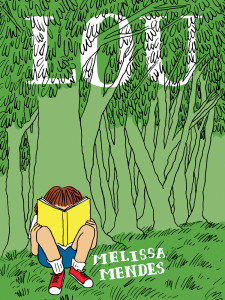 Lou is an eleven-year-old tomboy growing up in a small, working-class town in New England in the 1990s. One summer, it becomes clear that her brother Eddie’s boss at the pizza shop is mixed up in some unsavory business. Things become more precarious, until finally Eddie shows up for work to find his boss Joey has vanished.

Melissa Mendes is a cartoonist living and working in western Massachusetts. She attended Hampshire College from 2002 to 2006, and received her MFA from the Center For Cartoon Studies in 2010. Her debut graphic novel, Freddy Stories, was published with help from a Xeric Grant.

“Mendes’s visuals are accessible and unpretentious with the interplay between characters being particularly deft in approach. Just check out the body language between Lou and Eddie when little brother John goes missing. It’s wonderfully realised with a single hug speaking untold volumes about the relationship between the two.” —Andy Oliver, Broken Frontier