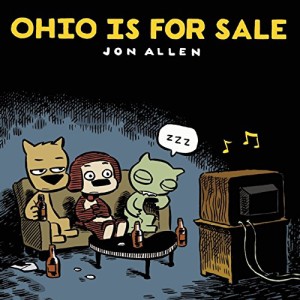 Jon Allen studied illustration at Pratt Institute and holds a master’s degree in painting from Cranbrook Academy of Art. He teaches foundation drawing. In addition to Ohio Is For Sale, he wrote and illustrated Vacationland, a self-published graphic novel.

“In virtually no time, Allen’s three adorable anthropomorphic post-college roommates cross the threshold from indifferent slackers to dangerous nihilists, burning down cars, blowing up property, and occasionally (albeit accidentally) killing one another with baseball bats.” —Publisher’s Weekly