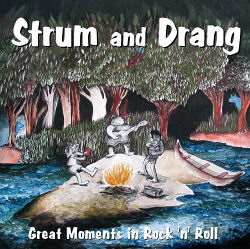 Great moments in rock ‘n’ roll. Everyone has at least one. For three years, Joel Orff has collected people’s stories, illustrating them, and posting them on his web site. Though several of these comics feature well-known musicians, they aren’t necessarily about music. They may be life-defining experiences, or they may be small and sublime occurrences that the narrator has never forgotten, or moments that they would have liked to have forgotten, but couldn’t, because they made too good of a story. These are funny and sometimes poignant comics about people struggling with and celebrating their circumstances, often through unlikely forms of self-expression.

“Like Lynda Barry with Ernie Pook’s Comeek, Joel Orff’s Great Moments In Rock ‘n’ Roll strike at the heart of some deep emotional truths about adolescent longing and the power of dreams in Nowheresville, U.S.A. Orff understands that rock (like cartooning?) is no mere “hobby,” but a way of life. And like an unforgettable melancholy pop tune or a timeless, enervating rocker (think Brian Wilson’s “God Only Knows”; think Nirvana’s “Smells Like Teen Spirit”) he taps into a soulfulness that is all too rare today in any medium.”
— Jim DeRogatis, pop music critic, Chicago Sun-Times, and author of Let It Blurt: The Life and Times of Lester Bangs, America’s Greatest Rock Critic