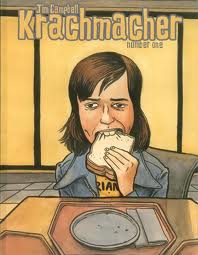 Krachmacher contains three stories. “At the Shore” centers around Marianne, a teenager who finds herself involved in a seemingly mundane adventure that grows increasingly more bizarre as she and her friends become integral players in it. This quirky character drama introduces Marianne and her four friends. The other, more subtle, narrative arc of “Unsere Freund” revolves around the surreal flashbacks Marianne suffers through, taking her back to memories of her family and her strange childhood. The flashbacks maintain a level of magic realism; we don’t quite know if they’re truth or fiction, but it reveals to the reader how desperate Marianne is to be understood by her friends, who, at this stage of the narrative, would rather not get involved. The last story, “Shipwrecked Hopes,” is a simple, humorous tale, light tone and is a perfect companion piece for Krachmacher. The book’s title, Krachmacher, translates as “noise maker.” And while it’s not terribly important that this fact be understood by the reader, it does mirror the conflicts that many of the characters Jim Campbell writes about face – overwhelmed with emotion, they make noise, either real or metaphorical, to drown out their problems.