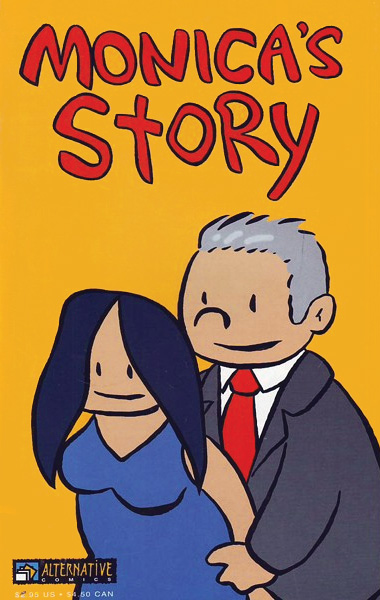 The millions of civic-minded Americans who read the Starr Report and wondered “but where’s the love?” will find their prayers answered with Monica’s Story, the comic book adaptation of the most important and intimate American public document since the Bill of Rights. Published by Gainesville, Florida publisher Alternative Comics, this 32-page, black & white, one-shot is adapted and scripted by Jon Lewis, penciled by James Kochalka, and inked by Tom Hart, and takes the reader from Bill and Monica’s first stolen glances to the turmoil, tumult and tears of their breakup.

Kochalka and Hart’s cartoony, expressive artwork cuts to the heart of the matter, and the story unfolds in a show-don’t-tell manner far removed from the narrative-heavy style common to most comic book adaptations of the past. “As a mass of raw data, the Starr Report is bleak and impersonal,” said Alternative Comics publisher Jeff Mason, “These guys have turned it into something dramatic and rather touching.” The simple eye-catching artwork depicts the rather explicit subject matter in a tasteful R-rated fashion and lends the characters an unexpected innocence. “Readers will find themselves sympathizing with a couple of characters they thought they had run out of all sympathy for,” said Mason, “in contrast with most ‘pulled-from-the-headlines’ comics that play up the sleaze and go for a photorealistic look, Monica’s Story is a bold, refreshingly honest read.”