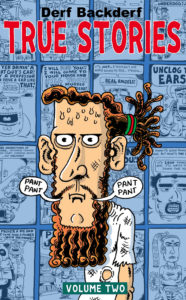 48 page 6″ x 9″ black and white comic with color covers
The second in a four issue series.