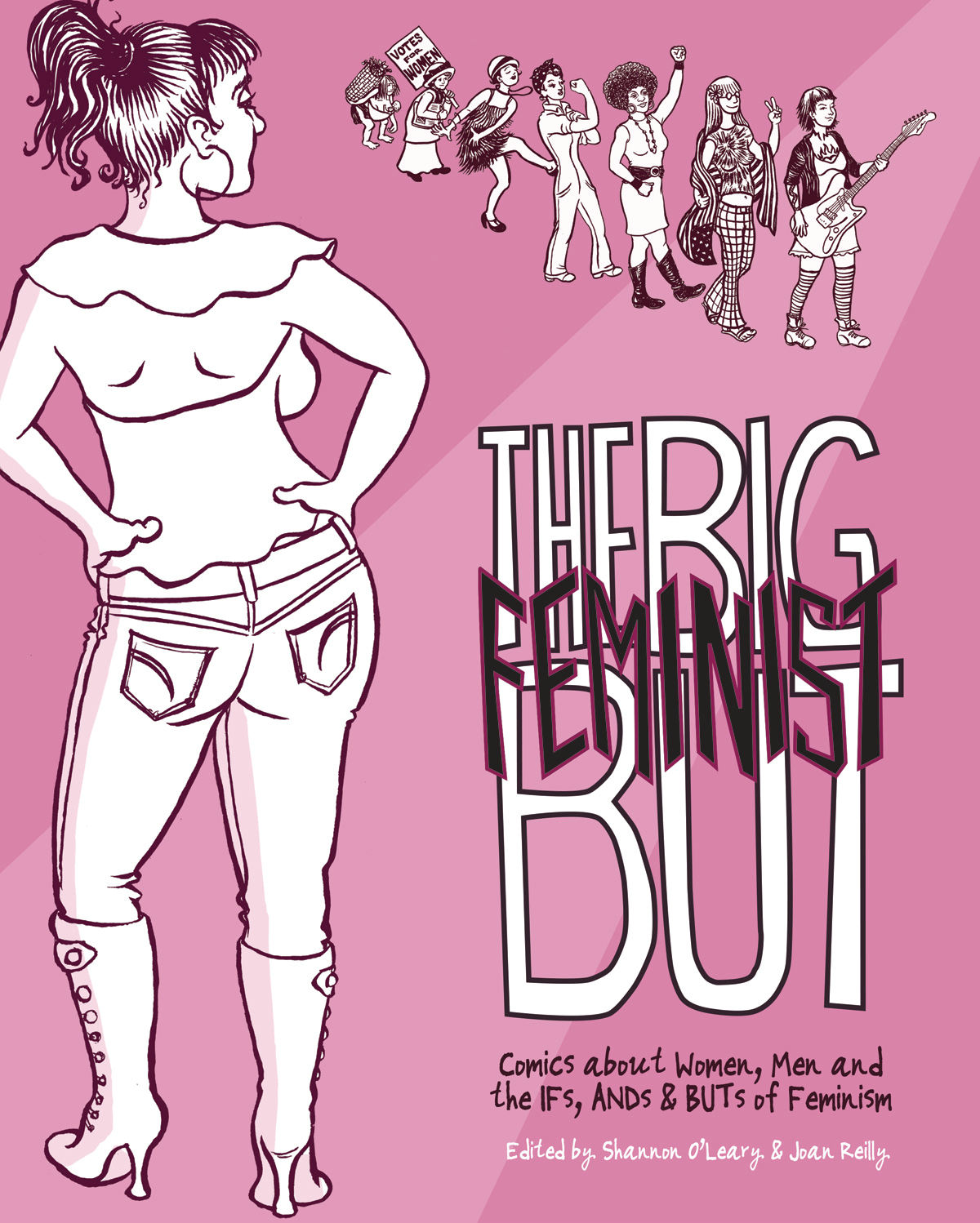 The Big Feminist BUT: Comics about Women, Men and the IFs, ANDs & BUTs of Feminism is a comics anthology that asks: What do we really mean when we say, “I’m not a feminist, BUT…” or “I am 100% a feminist, BUT…” What do our great big “BUTs” say about where things stand between the sexes in the 21st Century? We asked some of the most talented ladies (and gentlemen) working in comics and animation today, along with some of the smartest writers we know including Lauren Weinstein, Jeffrey Brown, Sarah Oleksyk, Gabrielle Bell, Justin Hall, Ron Rege Jr., Vanessa Davis, Josh Neufeld, Andi Zeisler, Angie Wang, Ulli Lust (winner of the 34th annual Los Angeles Times Book Prize for graphic novels/comics) and a whole lot more, to “but” into the heated discussion about the much more level but still contradictory playing field both sexes are struggling to find their footing on today.

4. Acknowledgments
5. Introduction by Shannon O’Leary, Illustrations by Joan Reilly
9. Feminist, adj by MariNaomi
10. Same War by Kristina Collantes
12. Pillow Talk by Trevor Alixopulos & Vanessa Davis
14. Asking For It Story by Shannon O’Leary, Art by Ric Carrasquillo, Layouts by O’Leary & Carrasquillo
24. Must Respect Women’s Power. No Experience Necessary Story by Mark Pritchard, Art by Liz Baillie
30. Manifestation by Gabrielle Bell
37. Times I’ve Been Mistaken For a Man Story by Beth Lisick, Art by MK Reed
42. I Don’t by Hilary Florido
45. Am I a Spinster Yet? by Corinne Mucha
53. What If I Don’t Want to Have a Baby? by Abby Denson
57. How To Make a Man Out of Tin Foil by Barry Deutsch
66. She-Drive by Joan Reilly
68. My Horrible Heroines by Shaenon K. Garrity
74. Eminent Victorians Story by Suzanne Kleid, Art by Joan Reilly
80. Cartoon by Emily Flake  81. Queer, Eh? by Virginia Paine
89. Marriage is Super by Justin Hall
96. Intersections by Angie Wang
98. Cartoon by Emily Flake
99. The Dead of Night by Dylan Williams 113. Skadi’s Wolves by Sarah Oleksyk
121. Prostitutes: For Teens by Jen Wang
127. Adam & Lilith by Ron Regé, Jr.
133. Cartoon by Emily Flake
134. Playmate & Me Story by Sari Wilson, Art by Josh Neufeld 138. Pixie Story by Charlie Jane Anders, Art by Britt Wilson
142. Her Fat Feminist Ass by Ulli Lust & Kai Pfeiffer
154. Container by Stina Löfgren
158. Flowering by Angie Wang
159. Cartoon by Emily Flake
160. Untethered Story by Lisa Ullmann, Art by Kat Roberts 172. Cartoon by Emily Flake
173. If This Is All You Get by Lauren Weinstein
177. Boy’s Life by Andi Zeisler
183. Doesn’t This Baby Realize We’re Trying to Redefine Gender Roles? by Jeffrey Brown
190. The Labyrinth by Andrice Arp & Jesse Reklaw
196. Afterword by Noah Berlatsky
198. About Our Contributors
200. Pool Butts by Jen Wang
Inside Back Cover. Lady Oaf by Ed Luce

“In all of these stories there is a sense of paradigms shifting and boundaries melting, with fresh possibilities springing forth – feminism in action.” — Robert Kirby, The Comics Journal

“One of the great strengths of this book: that no matter where you’re coming from, you’re bound to find an idea or two in here that are surprising or unexpected. And while none of the stories are preachy—many, in fact, are quite the opposite—you could easily find yourself considering some alternative points of view.” — Sean Kleefeld, Freaksugar

“Truth. Thankfully, The Big Feminist But is strong anthology work, with an emphatic and seriously-felt point of view. The criteria is also incredibly multifaceted: no one involved questions the need to use the word “feminism,” the authors just differ over what the term means and how to apply it in everyday life.” — Hillary Brown, Paste Magazine