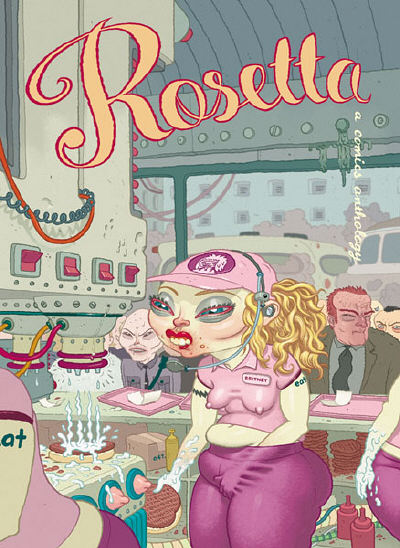 Rosetta is a squarebound 196-page comics anthology of sophisticated works by an international cast of award winning artists. Rosetta is targeted at a mature audience which views comics as a valid art form equal to any other. Rosetta not only entertains with new stories by over twenty award winning cartoonists from North America and around the world, but also reveals the creative processes and compromises that occur in the creation of comic art in the form of a sketchbook section.

The contributing artists have been set the task to go beyond the boundaries set by their previous works and to push themselves into areas that they consider dangerous to their reputations. Edited by Ng Suat Tong, with Tom Devlin doing Graphic Design, Rosetta is packaged under a phenomenal sequential jam cover and endpaper concept by Dave Cooper, Marc Bell, Miriam Katin and Ron Regé Jr.

Under a cover by Dave Cooper, Nick Bertozzi dreams about the sequentiality of Hokusai’s prints, Ivan Brunetti muses upon the music of Erik Satie, David Choe examines the Israeli-Palestinian conflict in a trip to the Gaza strip, David Collier discusses the quirks of Islam, Renee French provides an eccentric example of portraiture, Tom Hart explores his literary side, the respected cartoonist Lat retrieves a distant memory of his childhood in Malaysia, Matt Madden produces sequential magic out of old NYC mugshots, Miriam Katin delves into the moral questions surrounding her childhood in Hungary, Megan Kelso provides another chapter in her “Artichoke Tales”, James Kochalka provides an atypical example of his realism, Ron Regé Jr. philosophizes about consumerism, Katja Tukiainen provides a diary of her trip of India to study yoga and Stefan J H van Dinther tests the boundaries of experimental comics.

The creators contributing to this project include: