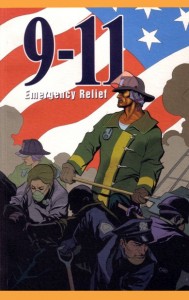 The terrorist attacks in New York, Washington DC, and Pennsylvania on September 11, 2001 touched people worldwide, and cartoonists have turned to art to express their grief and support. 9-11: Emergency Relief is a comic book project to benefit the American Red Cross featuring some of the comic world’s leading talents. From legendary creators such as Will Eisner and Harvey Pekar to new talents on the cutting edge of the comics medium such as James Kochalka and cover artist Frank Cho, over 80 cartoonists from all areas of the cartooning world have joined together in this community effort. Released January 2002 from Alternative Comics, 9-11: Emergency Relief is a collection of these cartoonists’ personal non-fiction accounts of their experiences related to the tragedy.