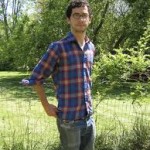 Thomas Herpich is a character designer and storyboard artist for many Adventure Time episodes. He is also credited with writing six episodes so far, including “Her Parents”. A graduate of the School of Visual Arts (SVA), Thomas has been getting his comics and illustration out there for about a decade. Thomas created two books for Alternative Comics – Gongwanadon and Cusp.

with contributions to:
Meathaus #8: Headgames