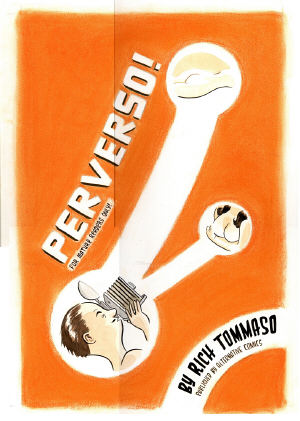 A taut, unsettling exploration of sexual perversion, Rich Tommaso’s PERVERSO! drives you straight into the mind and life of a “bad girl” photographer obsessed with his work. The pornographer, known only as Roy, is desperately seeking a more fulfilling sexual lifestyle than the one he has with his dull, uninterested, lush of a wife. But when his wife up and leaves him one day, he begins to feel more lost than free. Even his fantasies behind the camera begin to revile him–especially when a certain new “model” arrives at his studio. This is the second in a trilogy Tommaso has planned about “camera shy” men trying to create a more desirable world within their art form. So, keep watching, if you so desire!

Rich Tommaso is the author of such comics as “Clover Honey”, “The Horror Of Collier County”, “8 ½ Ghosts”, and the very controversial, “Perverso!” He has been published by Fantagraphics Books, Top Shelf, and Dark Horse Comics. This fall Hyperion Books will be publishing his new graphic novel, “Satchel Paige: Striking Out Jim Crow” written by James Sturm, director of The Center For Cartoon Studies, where Rich also teaches from time to time.