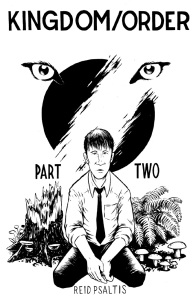 In the second of three issues of Kingdom/Order, our nameless protagonist is lost in the woods, and he starts to learn the call of the wild and the language of the woods. As he learns, what we know as reality begins to become more malleable, and he himself is becoming something less human.

“No one will mistake this for another Dr. Doolitle story. After reading the book I was questioning my own sanity almost as much as I was questioning that of the main character.” — Brian Gardes, Indie Comic Review

“Psaltis’ style in the comic is part Black Hole-era Charles Burns, part Tom Kaczynski’s Beta Testing the Apocalypse and utterly transfixing. [His] work on Kingdom/Order is an utterly unique and beautiful representation of how comics can be so simple and complex at once, how they’re able to communicate with such emotion and intensity but also be completely clear and understandable without the burden of written language.” — Nick Hanover, Loser City

“I immediately got behind this one because of the visuals, and I’m looking forward to seeing where it goes. This one is definitely on the strange/mystical side, and anyone who enjoys comics of that type definitely need to check it out.” — Rob McMonigal, Panel Patter