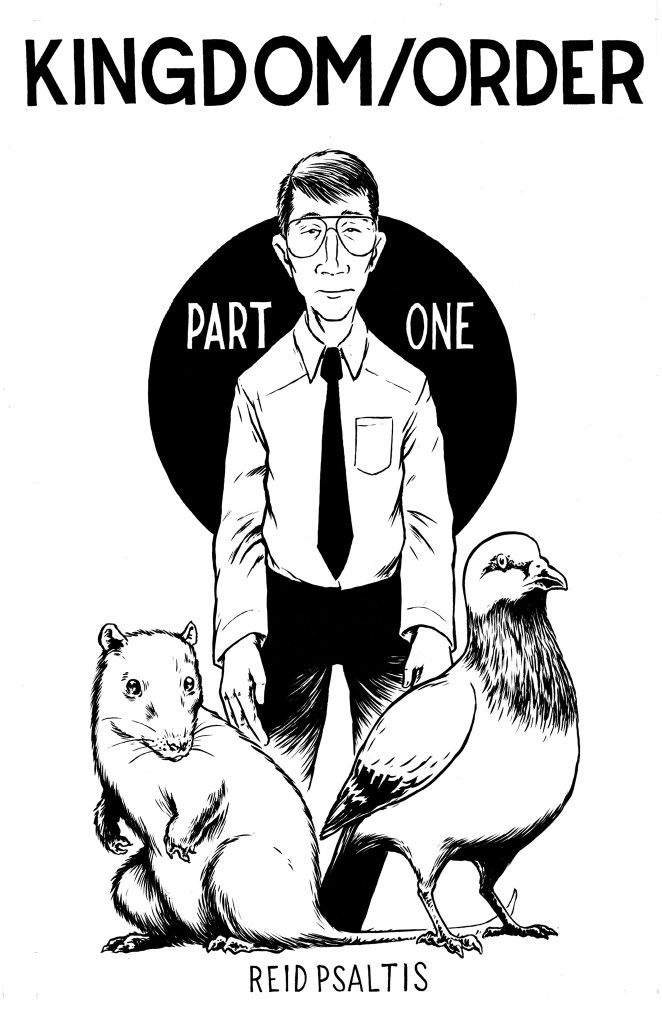 Brian Gardes of Indie Comic Review says it best: “Kindgom/Order wordlessly follows a man as he searches for some sort of meaning in his life.Through symbols and sounds it is clear that he is a part of the greater Natural world, and a bit divorced from the Modern world which surrounds him. The nameless protagonist finds himself noticing and following the sounds of the animals around him. But, how much of it is real, and how much of it is in his head?” Whatever the case, Psaltis will leave you speechless and hungry for the second installment of this haunting series.

“No one will mistake this for another Dr. Doolitle story. After reading the book I was questioning my own sanity almost as much as I was questioning that of the main character.” — Brian Gardes, Indie Comic Review

“Psaltis’ style in the comic is part Black Hole-era Charles Burns, part Tom Kaczynski’s Beta Testing the Apocalypse and utterly transfixing. [His] work on Kingdom/Order is an utterly unique and beautiful representation of how comics can be so simple and complex at once, how they’re able to communicate with such emotion and intensity but also be completely clear and understandable without the burden of written language.” — Nick Hanover, Loser City

“I immediately got behind this one because of the visuals, and I’m looking forward to seeing where it goes. This one is definitely on the strange/mystical side, and anyone who enjoys comics of that type definitely need to check it out.” — Rob McMonigal, Panel Patter