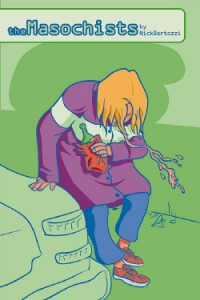 The Masochists is a dramatic look at obsession, an examination of isolation, and a eulogy for three people slowly crushing everything good out of their lives.

“Passing Out”, the first story in The Masochists, delves into the torturous world of adolescent pecking orders in which a boy is forced into an act of self-humiliation. The simultaneous destructive and redemptive quality of music-making in “U.V.Katastrophe” follows the central character on his journey out of an artistic dead-end and into his redemption, through a surreal rock concert. The rhythms of “5/4” are made up of the beats of compulsion self-mutilation and the very short distance between art and obsession.

The Masochists, an unflinching look at human behavior, will sit well with those intrigued by the early humanist dramas of Fellini or Kurosawa.