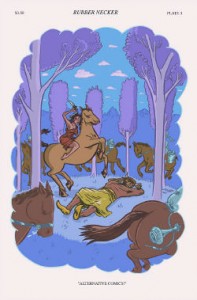 Nick Bertozzi, the exciting, inventive New York cartoonist best known for his Ignatz-Award winning “map-book” Boswash and 2001’s outstanding graphic novel The Masochists which garnered him a 2002 Eisner Award nomination, now unleashes his first ongoing series — and it’s his most amazing work yet! Bertozzi’s work on Rubber Necker has won him the 2003 Ignatz Award for “Outstanding Comic”, and two 2003 Harvey Awards for “Best New Series” and “Best New Talent”. Bertozzi’s bag of tricks is huge — one minute he’s laying his characters’ souls bare with his bold, expressive cartooning, the next he’s doubling you over with a bit of perfect streetwise dialogue, the next he’s teasing your brain with an ingenious twist on the workings of the comics page. At the heart of each issue of Rubber Necker will be a new chapter of “Drop Ceiling”, the intense, hilariously seedy tale of a young man facing ejection from the family business, and his quest for the fateful box left him by his late father.

Nick Bertozzi has filled the third issue of his self-anthology tight with good stuff! Scratch your beard over the third chapter of the ground-breaking “Drop Ceiling” which averages 20 panels per page but is always quite readable. Have a laugh with the short “Superfriendlyland”, a GRIT parody, or the “Silly Office Switchplates” that one can cut from the comic and affix to their light switches. Then wipe a tear from your eye after reading the tragic “Overpass”. Have a quick cocktail, then pore over several innovative tree house designs, a short experimental comic “Reflection”, and play the clever, ongoing “why is that the cover” game!