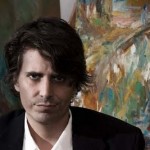 Nick Bertozzi grew up in and around Providence, Rhode Island, has lived in Philadelphia and Madrid, and currently lives in Queens, NY with his wife and daughters. He received a Xeric Grant and multiple Harvey Awards and Ignatz Awards for his cartooning. He is the author of The Salon, a graphic novel about Picasso, the discovery of Cubism, and magical absinthe from St Martin’s Press. He collaborated with Jason Lutes on the graphic novel Houdini: The Handcuff King, from Hyperion/CCS. He drew Glenn (The Colbert Report/Daria) Eichler’s Stuffed! for First/Second. And he’s hard at work on cartoon biography of Lenny Bruce for Houghton-Mifflin, written by Harvey Pekar as well as writing and drawing a Lewis & Clark book for First Second. You can read his ongoing sci-fi/fantasy cartoon, Persimmon Cup, for free every week at ACT-I-VATE. And for the past several years he has been teaching cartooning at NYC’s School of Visual Arts, as well as teaching stints at RISD and at The Center for Cartoon Studies in Vermont.