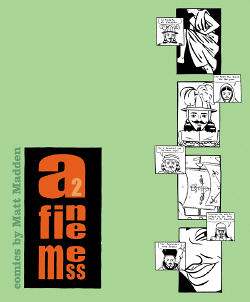 Matt Madden returns with exciting and challenging new short stories that invite the reader to explore new vistas of comics structure and storytelling. “Prisoner of Zembla” tells the tale of Alina Zek, an exiled philologist who makes a doomed last stand to save the written alphabet of her native language. The concern with the alphabet leaks beyond the story and into the very structure of the comic: the careful reader will find a hidden layer to the story, the “prison” which holds Professor Zek captive. “The Envoy” is the tale of four hardy seamen who accompany an eminent scientist and his young daughter on a perilous mission to uncharted Arctic waters. “La Mulata de Córdoba” is a retelling of a legend from colonial Mexico about a witch who conjures magic from a source we are all close to: the drawn line. Rounding off the issue will be another installment of Madden’s acclaimed “Exercises in Style.”

“Madden’s comics can offer the reader a sense of comic irony, a surprising, often moving poignancy and a playful, thoughtful rearrangement of the elements of comics style.” –Publishers Weekly