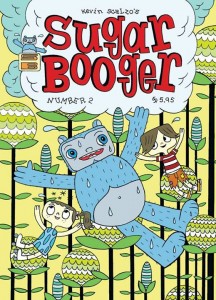 Your favorite candy booger makin’, candy booger eatin’ bear is back! This time around he’s distraught over the environment! That’s right, something is polluting his beloved countryside, and he’s dismayed to find out: It’s his own candy boogers that are stinking and littering up the place something foul! But don’t worry there’s still plenty of time for candy eating and boogers!

“Get this comic, is what I’m trying to say. …you’ve never seen anything like it.” – Kevin Bramer, Optical Sloth

“Kevin Scalzo’s work is always fun, and there’s nothing like his specific visual approach making comic books right now. This is a comic book that could have been published in alt-comics circles at any time at the last 25 years, and I mean that as a total compliment. Its strengths are some of alt-comics’ long-running strengths.” — Tom Spurgeon, The Comics Reporter