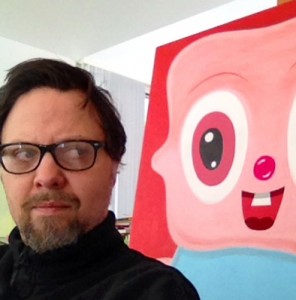 Kevin Scalzo (b. Winnipeg, Canada 1969) is an New York painter, author and illustrator, whose work has been shown in galleries and bookstores around the world. Known mainly for his visually intense color saturated paintings, mixed with cartoon imagery, Scalzo has developed a devoted following. Books of his work can be purchased at Wowcool.com, and his original paintings can be occasionally found at Copro Nason Gallery (Santa Monica) and Orbit Gallery (NYC) He currently lives and works near NYC with his wife and daughter.