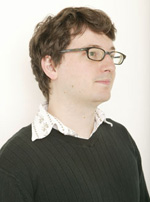 K. Thor Jensen’s comics have been published in dozens of books and magazines. He started self-publishing minicomics at a frantic pace at the age of sixteen, producing over 500 pages of work in a two-year span. His work has been translated into several languages, adapted for the stage, and shot into space. Red Eye, Black Eye is his first graphic novel. He currently lives in Washington with his wife and two children.

Says K. Thor of himself:

“I have been writing and drawing for a living (mostly) since I was sixteen years old. Born in Seattle, Washington, moved to New York City in 1997, and then moved to Friday Harbor, Washington in 2009, where I reside with my wife and two children. I support myself by writing for a variety of incredibly satisfied clients, as well as developing WordPress websites, freelance illustration and whatever else I can do. My most notable works to date include the graphic novel Red Eye, Black Eye and the chatlog series Amber Forever. My next book is Cloud Stories.”