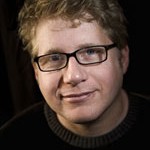 eld is a non-fiction storyteller who chooses comics as his medium. He is the author of the Xeric Award-winning A Few Perfect Hours (and Other Stories From Southeast Asia & Central Europe), a graphic novel collection of real-life stories about his travel experiences. He is the creator of the comic book The Vagabonds, and the co-creator of Keyhole (nominated for an Ignatz Award) and Titans of Finance: True Tales of Money and Business. He is a long-time artist for Harvey Pekar’s American Splendor. His comics have also appeared in World War 3 Illustrated, Fortune Small Business, mMode magazine, ReadyMade, The Village Voice, The Chicago Reader, In These Times, and many other venues. Neufeld makes his permanent home in Brooklyn, NY, with his wife, writer Sari Wilson, and their daughter, though Neufeld’s current fellowship puts the family in Anne Arbor, MI.

A.D: New Orleans After the Deluge
The Influencing Machine with Brooke Gladstone
A Few Perfect Hours (and Other Stories from Southeast Asia & Central Europe)
The Vagabonds #1
The Vagabonds #2
Titans of Finance