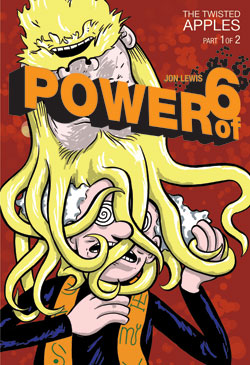 Jon Lewis, creator of the long-running, Ignatz Award-nominated True Swamp, now unveils the paranormal, superhuman and straight-up bizarre world of The 6. From their unassuming old house on Pine Street, this rarely-seen, little-understood group carries on a bold exploration of the very limits of human experience and the cosmos.

The 6 comprise some of the most extraordinary people alive—and naive young Jerry Weiss wants to join them. So he simply shows up uninvited at their front door, suitcase and all! Then, to make a good first impression, he accidentally opens a portal to interdimensional evil, gets his head swallowed by a flaming starfish, and nearly kills his hosts with a black sword.