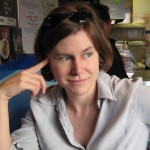 A Xeric Grant, Association of Alternative Newspapers, and Robert F. Kennedy Book & Journalism award-winner, Jen Sorensen has become a prominent voice in the altweekly world. She is the writer and artist behind Slowpoke, a cartoon which appears in alternative newspapers around the country, as well as in the nationally-distributed magazines. Since its debut in 1998 the weekly strip has since won seven awards from the Association of Alternative Newsweeklies, including First Place in 2012.

A progressive activist, Sorensen traveled to Denver in 2008 to blog and cartoon the Democratic National Convention for C-VILLE Weekly. was a featured speaker at the first annual ACLU membership conference in Washington, D.C. in 2003. In addition to Slowpoke, Jen does freelance illustration for such magazines as Nickelodeon, National Geographic Kids, and Legal Affairs. Jen’s work has made cameos on the set of the TV series “Queer as Folk,” and she was once clue “12 down” in the Time Out New York crossword puzzle. She has given presentations at at the Ohio State University Library Festival of Cartoon Art, Netroots Nation, the Rhode Island School of Design, the Hammer Museum in Los Angeles, the ACLU annual convention, and the Center for American Progress. A member of the the Association of American Editorial Cartoonists and National Cartoonists Society, she lives with her husband and small Toto-like canine unit.