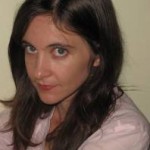 Born in England and raised in California, Gabrielle Bell began  to collect her minicomics in 1998, which resulted in When Im Old and Other Stories, published by Alternative Comics. In 2001 she moved to New York and released her autobiographical series Lucky, published by Drawn and Quarterly. Her work has been selected for the 2007, 2009 and 2010 Best American Comics and the Yale Anthology of Graphic Fiction, and she has contributed to McSweeneys, Bookforum, The Believer, and Vice Magazine. The title story of Bell’s book, Cecil and Jordan in New York has been adapted for the film anthology Tokyo! by Michel Gondry. She lives in Brooklyn, New York.

The Voyeurs
July Diary
When I’m Old (and Other Stories)