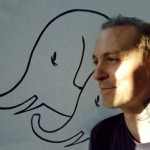 Brandon Graham was born in 1976, in Oregon, and most of his life was spent in Seattle, Washington. He left high school after six months to draw comics. He has done work for Heavy Metal, DC comics, Spumco, and lots of others. He lives Vancouver, British Columbia, with his lady, Marian Churchland.