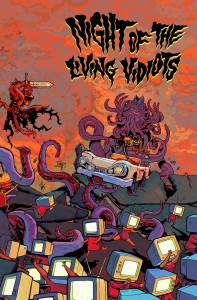 Sci-fi, horror, and comedy melted together and topped with a Twilight Zone twist. Darkly funny tales featuring mad science, gothic anime, TV zombies, kaiju, giant robots, monsters from the deep, and even a haunted sweatshirt. From the Emmy Award winning storyboard artist and character designer of Adventure Time and creator of The Babysitter and Escape from Dullsville.

If you’re familiar with Andy’s work you might have seen his comics appear in anthologies like Popgun from Image comics or Tales of Hot Rod Horror from Cackling Imp Press. Now those stories have been expanded, reformatted, and collected with lots of spooky/funny never-before-published stories in a full color anthology: