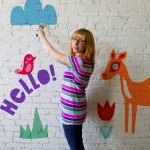 Allison Cole graduated from the Rhode Island School of Design with a degree in Printmaking. A former art director, she began making her own silkscreened comics a few years back. She has contributed to anthologies such as Studygroup 12 and Kramers Ergot, and has several more projects in progress. Allison currently lives in Providence, Rhode Island, where she works out of a small bungalow.

with contributions to:
Alternative Comics #4