Episode 185 of the Comics Alternative podcast is a Publisher Spotlight on Alternative Comics. We are very excited to be part of this great show and deeply flattered that they would take the time to focus on us.

Go give it a listen. 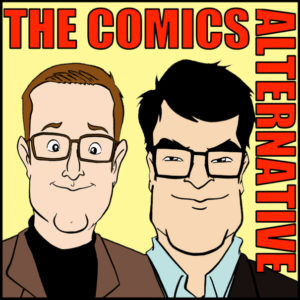 “This week the Two Guys with PhDs focus a critical spotlight on the spring releases coming out from Alternative Comics and the other small presses that are part of its distribution co-operative, Floating World Comics, Hic + Hoc Productions, Study Group Comics, and Press Gang. This is a jam-packed episode and longer than usual, a discussion that covers eighteen different titles among the five indie presses. Before they jump directly into the comics, though, Derek has a brief conversation with Marc Arsenault, the publisher of Alternative Comics and one of the ringleaders of the co-operative. He asks Marc about the origins of the press, its relaunch in 2012, its distribution agreement with the other indie publishers, and what readers could anticipate coming out of Alternative Comics in the months to come. After that introductory interview, Andy W. and Derek begin discussing the individual titles some out this spring, and organizing their conversation by publisher.”