Alternative Comics does not have a FCBD book out this year, but many other fine comics companies do, and a few of them have work from artists that have been published or distributed by us. 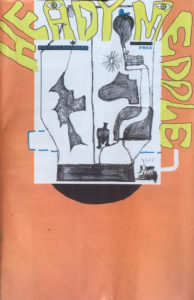 There is also an indie and unofficial book this year out of Portland—Heady Meddle, published by Emily Nilsson and Sean Christensen of Gridlords, Tim Goodyear of Teenage Dinosaur, and Jack Hayden of Snakebomb Comix. The cover is by E*Rock and the inside pages are by Dylan Jones, Erik Nebel, Shanna Matuszak, Colburn Paluck, Mike Washburn, and Daria Tessler.

The Wow Cool® Alternative Comics store in Cupertino is having it’s third annual Free Comic Book Day event from 10am-7pm on Saturday, May 7th. There will be tons of free comics for kids and adults, arts and crafts activities for kids, a lemonade stand, a voter registration booth, and everything in the store will be 20% off. There will also be several bargain bins of manga and comics (including superhero stuff). There will also be a sale in the online store WowCool.com. We may be slimming our backstock of a few choice vintage Alternative Comics titles as well.